Harry Otto Becker (1865-1928) was the son of German immigrants who fled Bismarck’s forced annexations in Prussia, born in Colchester, studied in Antwerp and Paris, and held a studio in London.  However, it was the Suffolk countryside and those who worked on it which most inspired him and became the dominant subject of his distinctive works. 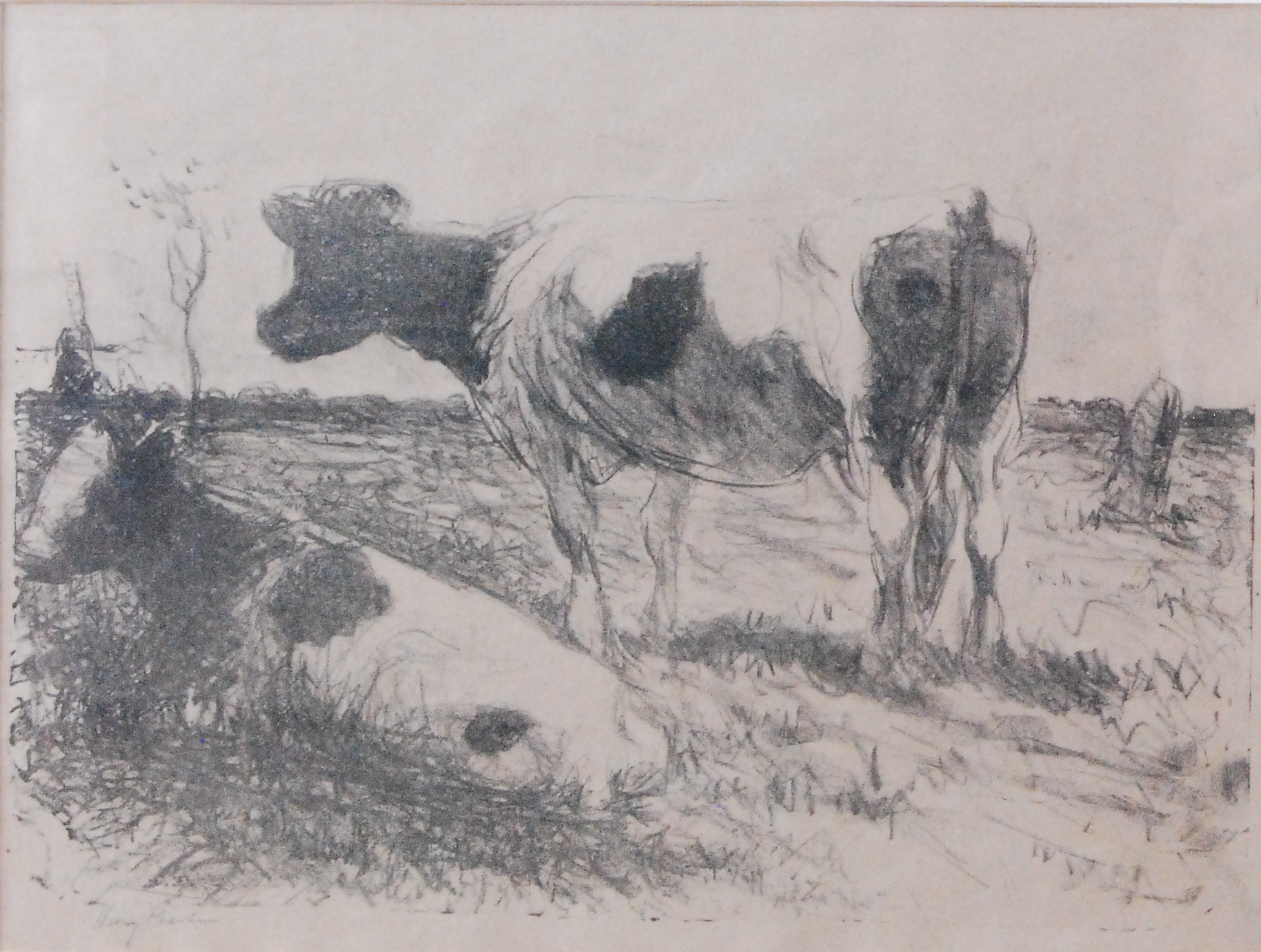 His early career followed a typically well-trod artists’ path of formal training at the Royal Academy in Antwerp from the age of 14, followed by tutelage in Paris under Carolus Duran.  He had his first picture accepted for the Royal Academy annual exhibition in 1886, and continued to exhibit both in Colchester and London.  In 1894 he moved to London where he opened a studio specialising in lithographs, whilst regularly travelling to Holland, East Anglia and Kent.  East Anglia clearly proved a great inspiration as he rented a property in the heart of ‘Constable Country’ and became a member of the Ipswich Fine Art Club in 1890.

Becker married fellow artist Georgina Waddington in 1902, and they gave birth to a daughter Janet, the following year.  During this time he received several high-profile commissions and his lithographs continued to be popular sellers; his first solo exhibition at the Baillie Gallery in 1905 was solely of lithographs, and the print expert Campbell Dodgson bought several for the British Museum collection.  Unfortunately, several events conspired to bring disillusionment and disappointment to the Beckers life in London. One notable commission for a mural to adorn a new department store belonging to a certain Mr Selfridge fell through due to disagreements – possibly because of Becker’s growing aversion to commercialisation.  The couple lost a baby in infancy, Becker’s supportive father died, and they endured a successful but ultimately intrusive and humiliating court case.  In the background, growing anti-German sentiment in the run-up to the First World War may also have generated a sense of unease and unhappiness.

The family moved to Wenhaston in Suffolk in 1913, and then on to Darsham.  Becker threw himself into recording all aspects of Suffolk agricultural life – in all seasons and weathers, and at all hours.  He would accompany ploughmen, sheep-shearers, potato pickers, woodcutters etc, spending day after day in the fields dashing off sketch after sketch depicting the energy, strength and endurance required for this way of life.  These were no pastoral idylls; the works captured the largely unmechanised toil of man and beast, sometimes under leaden skies and heavy clouds, wading through ditches or sweating at the plough.  He probably wouldn’t have realised it at the time, but this way of life was soon to change irrevocably due to mechanisation and the effects of war.

Despite local support, including from the Southwold artist Dorothy Reynolds and her husband Pierse Loftus, the businessman and politician, the Beckers were living in near poverty while in Suffolk.  Two commissions for London Underground posters were undertaken in 1912 and 1915, but Harry stopped exhibiting in 1916, and Georgina’s job as an art teacher appears to have been their sole form of income.   Harry continued to draw and paint, but these works mainly accumulated in the family’s cottage as he was so reluctant to part with them.

Harry Becker died of pneumonia in 1928 and is buried in Blythburgh churchyard.  Just a couple of years later, the author Adrian Bell, who had been farming in West Suffolk while Harry Becker was painting in East Suffolk, began publishing his Suffolk trilogy comprising of Corduroy, Silver Ley and The Cherry Tree.  These volumes were a literary tribute to Suffolk agricultural life and became immediate best-sellers.  Bell and Becker had never met, but each used their own medium to convey a vanishing way of life, therefore when Bell came to publish illustrated editions of his volumes in the 1940s, there was only one possible artist.  Becker’s art resonated so well with Bell’s writing that, as he stated himself in a 1945 article in Everybody’s Weekly, “It’s him or nobody”. 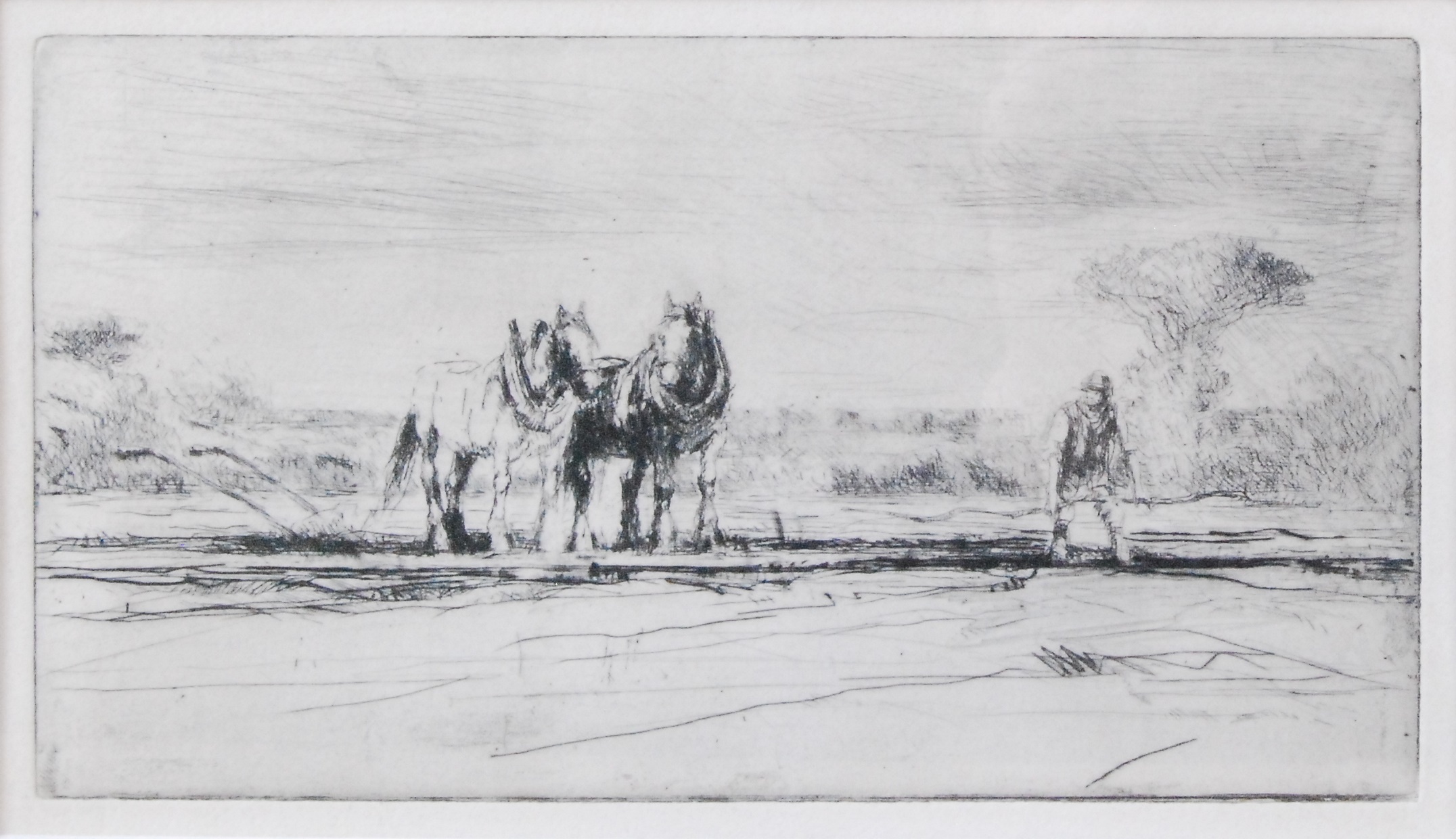 The Loftus family continued to champion Becker’s work through exhibitions and to support Georgina and Janet. Upon their deaths in the 1950s, half of Becker’s studio was left to the Loftus family, while other works found their way into public institutions.  Becker’s work has been ‘re-discovered’ in the last couple of decades and several exhibitions and publications have proved extremely popular and sparked a renewed interest in his artistic vision of a now long-lost world.

Works by Becker are included in the Colchester & Ipswich Museum Collection, the London Transport Museum, and the British Museum amongst others.