The Art Collection of Dr Rayner from The Cedars, Kenninghall 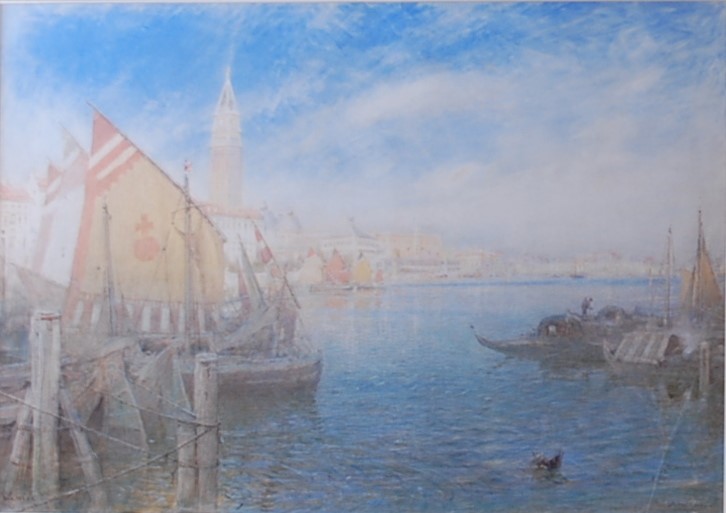 Lacy Scott & Knight’s 22nd March Twentieth Century Design and 23rd March Fine Art & Antiques auctions will include the selected contents of The Cedars, Kenninghall, including an important collection of original works on canvas and paper by Albert Goodwin.

The pieces are being sold by Mrs Elizabeth Rayner, widow of the late Dr Tom Rayner, and are from the family home & former village surgery The Cedars, Kenninghall.  Dr Rayner moved down to Norfolk from Derbyshire with his family in 1968 becoming the GP for Kenninghall and the surrounding villages until he retired from private practice.  He was a well known and much loved member of the community until his death in 2007.

Dr Rayner was a keen collector with a particular passion for Victorian watercolours, having one of the largest private collections of paintings that have come to auction with us in recent years.  His collection includes many works by Albert Goodwin, George & Charles Cattermole as well as examples by William Lionel Wyllie, William Mulready, Stephen John Batchelder and many other alumni of the Victorian and Edwardian art scene.

This sale includes over 50 original paintings by Albert Goodwin RWS (1845-1932) whose works are held in collections at the British Museum, the Tate, the Victoria & Albert Museum, The Fitzwilliam Museum, Maidstone Museum & Bentlif Art Gallery, Manchester Art Gallery and The Whitworth Art Gallery in Manchester amongst others.  Albert Goodwin exhibited his first works at the Royal Academy 1860 at the age of only 15 and went on to be an extremely popular and prolific painter – becoming a protégé of John Ruskin, with whom he toured the Continent, and working right up into his 80s. He exhibited regularly at Royal Academy between 1860 and 1920, and at the Royal Society of Painters in Watercolours, as well as holding many solo shows including at the Fine Art Society.  He travelled extensively throughout Europe as well as the Americas, India and New Zealand, and found constant inspiration in nature.  He would often sketch from nature and then complete works from memory in the studio with imaginative touches - sometimes many years later.  Although a contemporary of the pre-Raphaelites and clearly an outlier part of that movement, Goodwin was a follower of JMW Turner and his works display an atmospheric quality which demonstrate Turner’s strong influence.

The auctions also include a good selection of Royal Worcester and Royal Copenhagen porcelain, Georg Jensen jewellery and other interesting lots from the same property. All lots from this estate are prefixed with * in the catalogue. Going forward, our June Fine Art sale will include a significant number of watercolours by uncle and nephew George & Charles Cattermole also from this property.