Our 14th September Twentieth Century Design auction will include over 200 lots of Moorcroft Pottery ranging from the start of the 20th century through to modern pieces, including works by Moorcroft offshoot companies Cobridge and Black Ryden. Most of the pieces were passionately gathered over several years by a single owner and stored in mint condition in his Norfolk home.

Moorcroft Pottery has been desirable since a 24-year-old William Moorcroft was first employed in 1897 as a designer at James MacIntyre & Co’s Staffordshire factory in the heart of ‘The Potteries’.  He soon proved his worth and was put in charge of the company’s pottery studio within a year.  Moorcroft’s patterns were strongly influenced by the burgeoning Art Nouveau scene, and they were stocked by prestigious stores such as Harrod’s, Liberty’s and Tiffany.

One of Moorcroft’s earliest designs was Florian ware, which continues to be highly sought after today.  The pieces were extremely successful and Moorcroft was awarded a gold medal at the 1904 St Louis World Fair International Exhibition.  MacIntyre’s began to resent Moorcroft’s popularity (exacerbated by the fact that, unusually, Moorcroft signed his own works which raised his profile above the rest of the Company), and they shut down his studio in 1912.  Undeterred, Moorcroft secured funding from Liberty & Co and opened his own pottery the following year in Burslem – along with several other workers from MacIntyre & Co!  The new business flourished and Moorcroft was appointed ‘Potter to the Queen’ in 1928 by Queen Mary, who was a collector of his works. 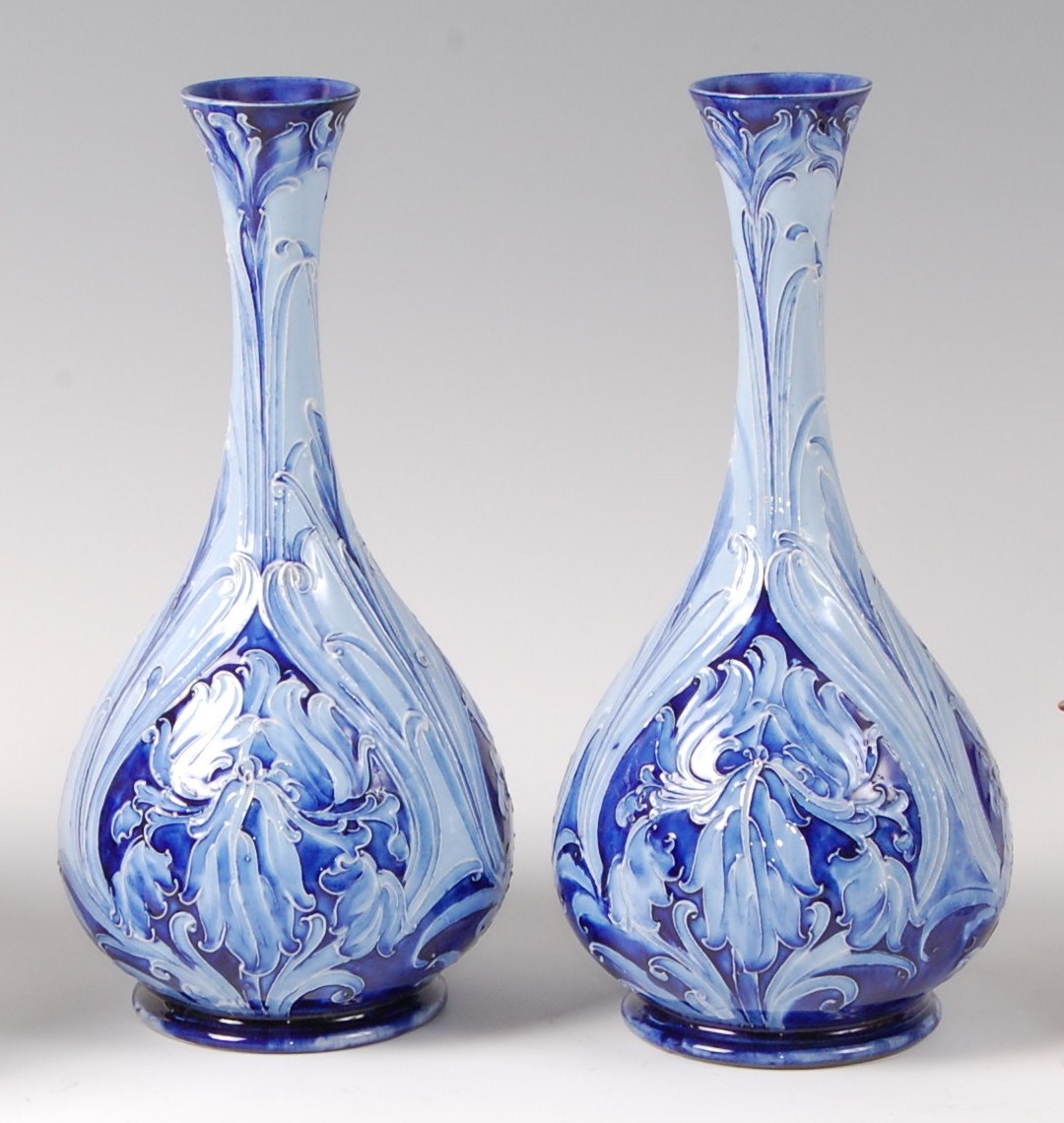 Control of the company passed to William’s son Walter in 1945, shortly before William’s death.  It was during Walter’s leadership that the characteristic flower designs began to emerge and the use of increasingly bright colours. Liberty’s share in the company was bought by Moorcroft in 1962.

Moorcroft items are all hand-painted and employ a distinctive trailed slip technique known as tube-lining.  Sadly, this labour-intensive production method led to rising staff and fuel costs, and the company suffered financial difficulties in the latter part of the 20th century.  However, a series of innovative designers including Sally Tuffin, Rachel Bishop and Emma Bossons etc helped to keep Moorcroft Pottery a firm favourite with collectors and in the home.  This popularity has remained undiminished over the years, and these distinctive wares now have a global fanbase – with collectors including former US Presidents, famous actors, British Prime Ministers, and of course, the current Queen who continues to include new Moorcroft designs within the Royal Collection. 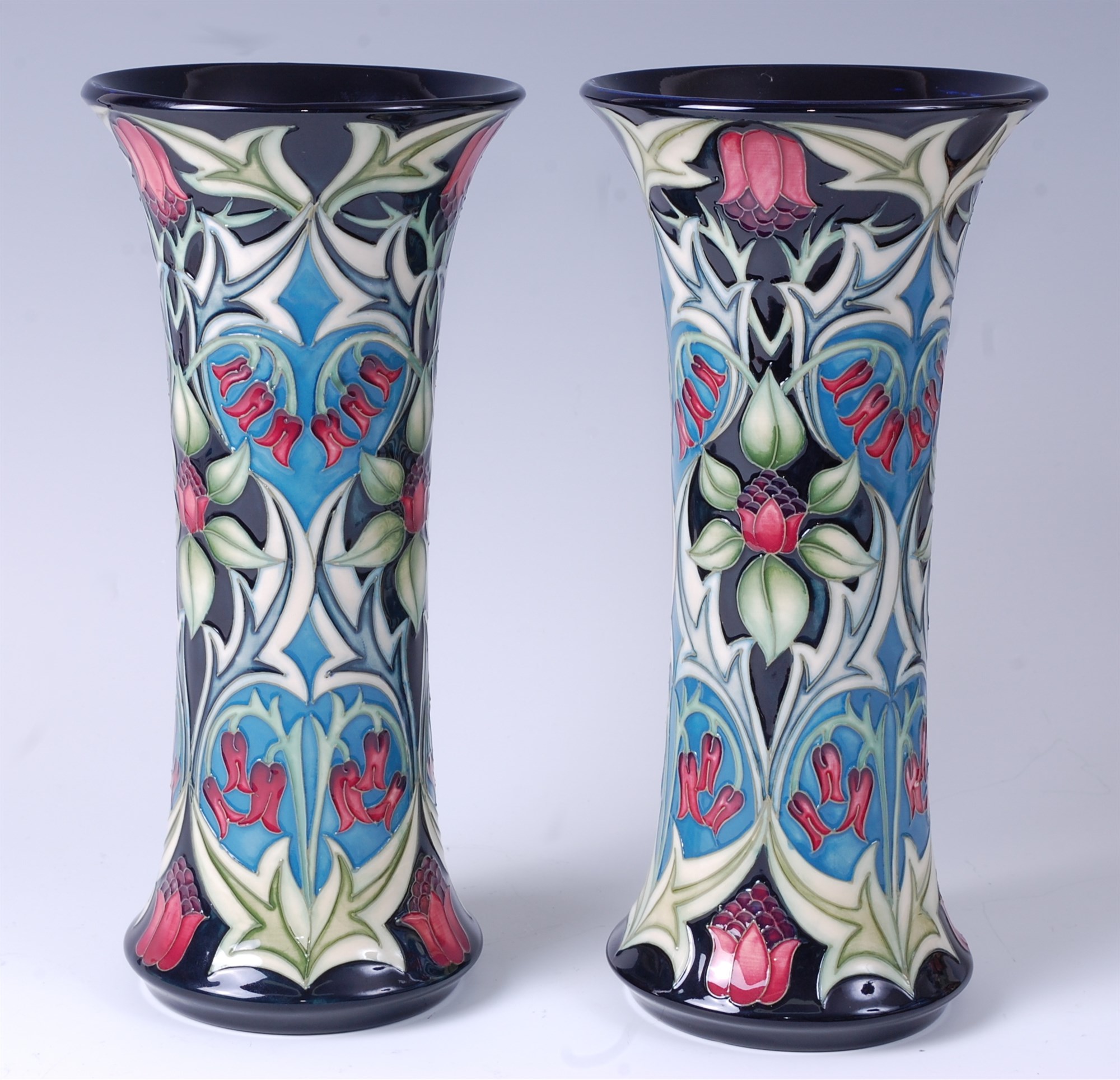 A pair of modern limited edition Moorcroft pottery vases in the Isabella pattern, 2004

Two short-lived offshoots from the Moorcroft Pottery family were Cobridge Stoneware (1998-2005) and Black Ryden (2002-2005).  Both of these companies were launched to explore and develop new pottery techniques such as ‘upbrushing’ and many of the celebrated Moorcroft designers were employed to decorate the pieces.  Due to the limited numbers of works produced by these sister potteries and their excellent workmanship, the pieces are now in much demand by collectors.

The majority of the Moorcroft works in our auction are from the late 20th / early 21st century and include rare trial pieces as well as some of the most popular designs.   The auction will take place on Friday 14th September at 10am (all to be sold without reserve), with viewing on Thursday 13th 10am-7pm and on the morning of the sale from 9am.

If you have any pieces which you would like included in this sale, please contact Shaun Crichton scrichton@lsk.co.uk / 01284 748 618 to arrange a free valuation.

The fully illustrated catalogue (which includes the whole Twentieth Century Design auction as well as Music & Film Memorabilia, and the Fine Art & Antiques auction to be held on the following day) will be available online or by post for £10 approx two weeks prior to the auction.