Back in 2007 we were approached by a vendor with a very intriguing, and rather gruesome, item to sell. The lot was a 19th century silk shawl decorated with Michelmas daisies. So far, so par for the course. However, the shawl was covered in bloodstains and had been passed down through the vendors family with a sinister back story.

The vendor was descended from a City of London police sergeant called Amos Simpson, who was on the beat the night of Jack the Ripper's 'double event' on 30th September 1888. Apparently Amos was one of the officers on the scene of the discovery of Catherine Eddowes mutilated body in Mitre Square, and somehow ended up in the possession of a silk shawl found at the scene. The story goes that he gave the shawl to his dressmaker wife, but she was understandably horrified at the thought of using the material and locked it away. Over a century later one of Amos's descendants was standing in our offices with the bloodstained shawl.

Anyone with a passing interest in the Jack the Ripper murders is aware that there is a whole industry based on possible suspects and theories ranging from an American quack doctor, Queen Victoria's physician, the Prince of Wales, a butcher, a barrister, the artist Walter Sickert, a Polish hairdresser and many more. We did some research, realised very quickly that buying the shawl would be a matter of faith.

There was a lot of publicity generated before the sale and we were inundated with emails and telephone calls from interested parties. The shawl also sparked big debates on Jack the Ripper forums and drew a massive crowd on the day of the sale. However, the provenance proved too shaky for Ripperologists, and the shawl failed to sell. On the day.

A few days later we were approached by Russell Edwards, a businessman who had become fascinated with the murders a few years previously. Mr Edwards has spent the seven years since doing a massive amount of research and putting together a book entitled 'Naming Jack the Ripper'. His breakthrough came when he enlisted the help of forensic scientist Dr. Jari Louhelainen, who is an expert in historic DNA analysis. In September 2014 they announced that Dr Louhelainen had extracted mitochondrial DNA that matches female line descendants of Catherine Eddowes, and mitochondrial DNA that matches female line descendants of a sister of Aaron Kosminski (the Polish hairdresser) from the shawl. Dr. Louhelainen stated that "The first strand of DNA showed a 99.2 per cent match, as the analysis instrument could not determine the sequence of the missing 0.8 per cent fragment of DNA. On testing the second strand, we achieved a perfect 100 per cent match."

The news has understandably caused a furore and not everyone is convinced by the findings which are yet to be peer reviewed. However, we are happy to have played a small part in (maybe) helping to solve one of Britain's greatest murder mysteries. 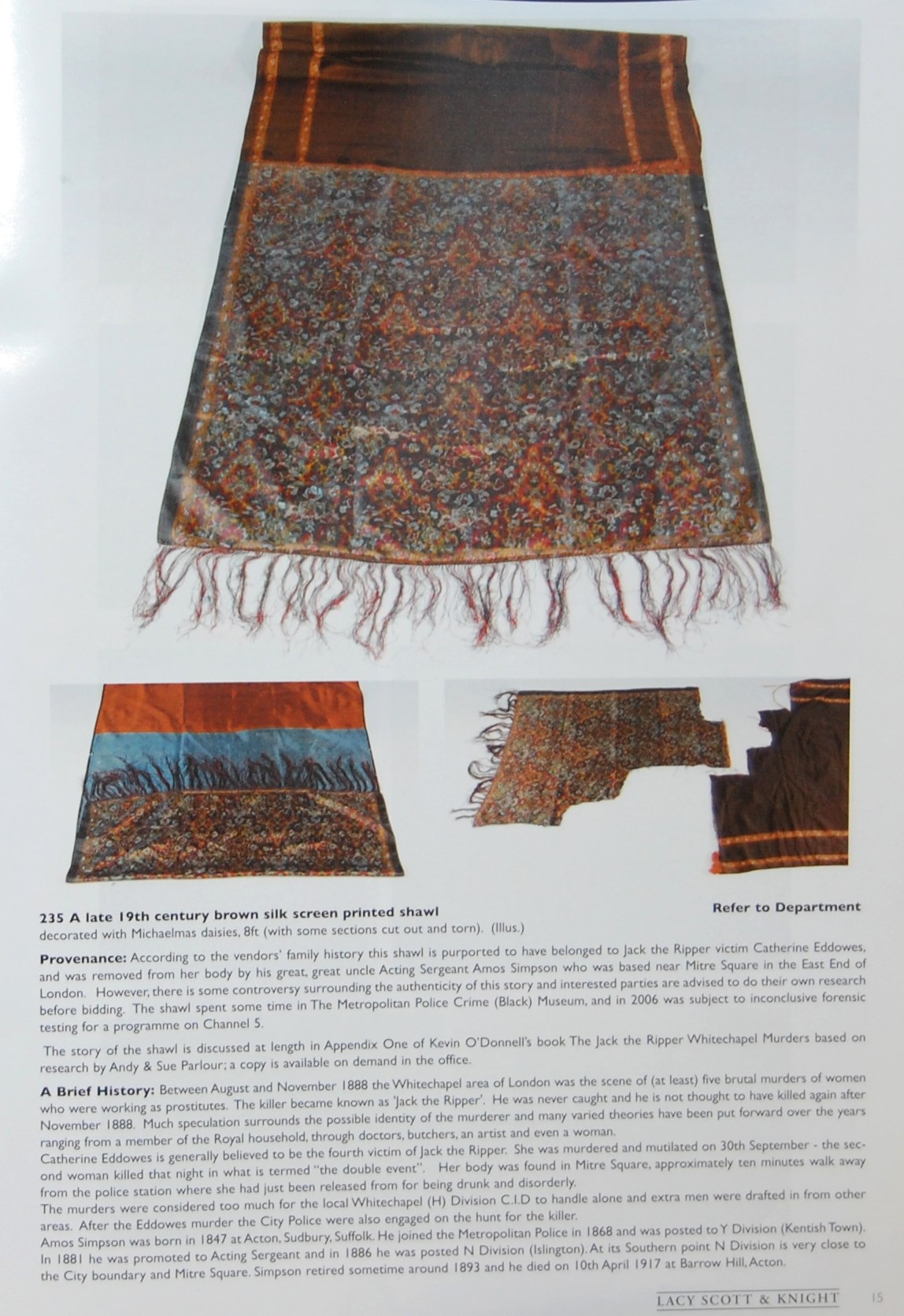