Clients who attended our March Fine Art & Antiques will remember the fabulous collection of Albert Goodwin (1845-1932) paintings which all sold extremely well and garnered a lot of pre- and post-sale interest.

The most sought after of the Goodwin’s was a beautiful imagining of the Happy Isle of Salahat from the tales of The Arabian Nights, which sold for £24,000.  Those artworks were consigned from the home of the late Dr Rayner in Kenninghall, who was a prolific collector of fine Victorian paintings which rendered his house, The Cedars, into a kind of residential art gallery.  We are therefore pleased to offer in our 15th June Fine Art auction another large selection from the same collection, these being by uncle and nephew artists George & Charles Cattermole. 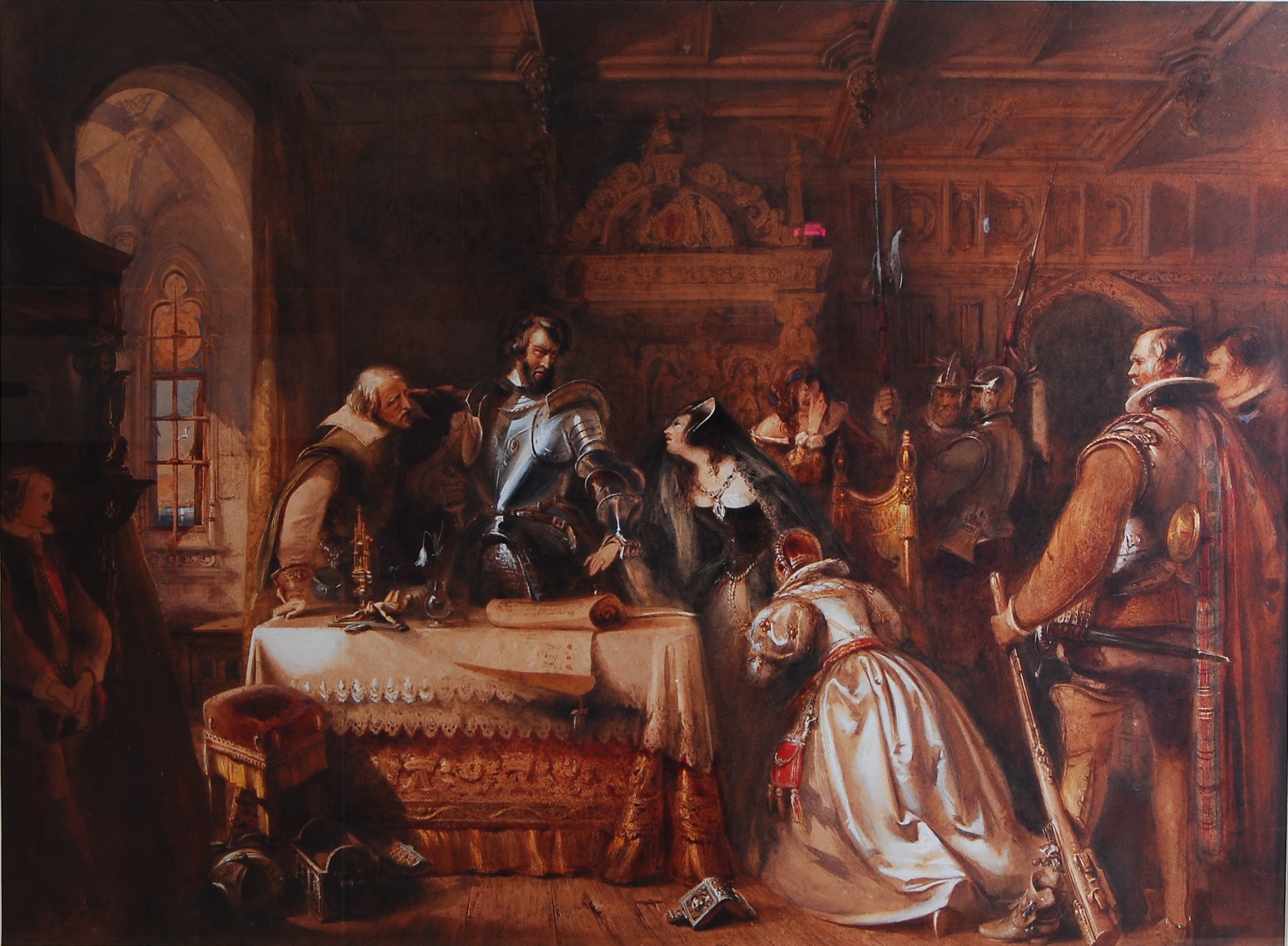 Norfolk-born artist George Cattermole (1800-1868) began his career as a draughtsman in the service of antiquary John Britton.  As well as engravings and paintings, he was much in demand for book illustrations and worked closely with his friend Charles Dickens on The Old Curiosity Shop and Barnaby Rudge. He was a prominent member of the exclusive Society of Painters in Water Colours, and was one of the five English artists who was honoured with the first-class medal at the Exhibition of Pictures at Paris in 1855.  Cattermole excelled at historical scenes, often depicting important events or portraying a chivalric view of Medieval Britain.  His elder brother Richard wrote histories of the English Civil War, which were illustrated by George to great acclaim.

Despite being one of the foremost watercolour artists of the early Victorian period with numerous high-society friends, George Cattermole suffered from family bereavements and financial worries later in his life.  Upon his death in 1868, his friends rallied to help provide for his widow and remaining seven children. A petition to the Royal Society failed, but former friend Benjamin Disraeli managed to secure a place for Mrs Cattermole on the civil list which resulted in a pension of £100 per year. 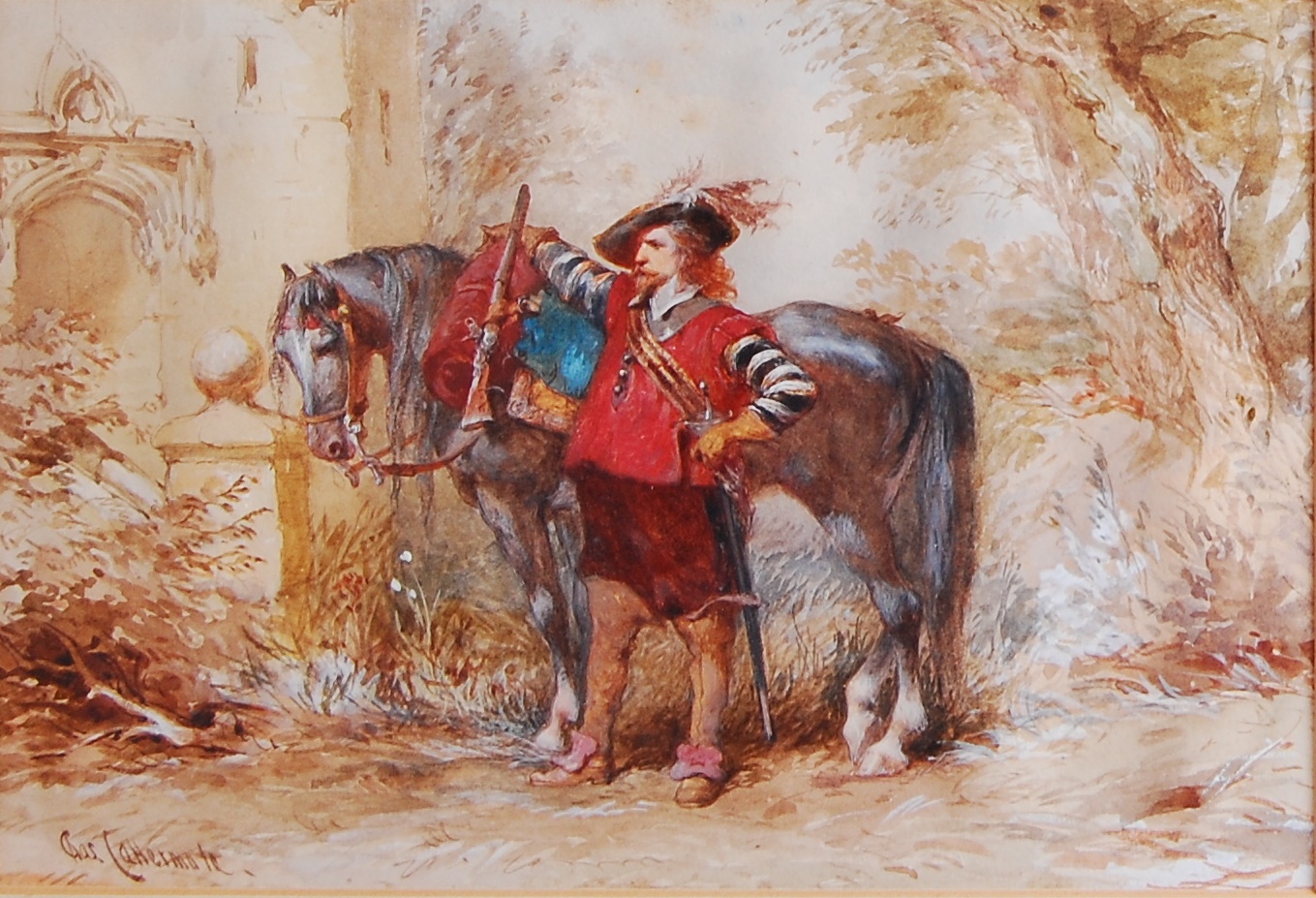 Charles Cattermole (1832-1900) was clearly either trained or greatly influenced by his uncle George’s work, with many of the latter’s historical scenes being recreated by Charles.  He became RA in 1870 and exhibited at the New Watercolour Society, the Royal Society of British Artists and the British Institution. His attention to historical detail also extended into theatre costume design, with some of his pieces still being held in the Royal Shakespeare Theatre’s collection and the V&A.  Cattermole regularly worked for actor-manager Henry Irving, designing over 400 costumes and props for one notable production of Macbeth in 1888 alone (in fact, he designed all of the costumes except that of leading actress Ellen Terry who had her own designer on set).

Between them, the Cattermoles span the entire 19th century, the art of which was particularly notable for its’ romantic view of history; epitomised by the books of Sir Walter Scott, and possibly exacerbated by rapid industrialisation and the increasing urbanisation of society.  The approximately 50 Cattermole works in our 15th June auction are chiefly watercolours and are typical of their passion for literary and historical themes  – Macbeth’s murder of Duncan in his bed is echoed elsewhere in the sale by a painting showing the murder of David Rizzio in Mary Queen of Scots Holyrood bedchamber,  Civil War soldiers share wall space with the Biblical Samson & Delilah, while Monks go about their monastic business in other scenes.   Some of the paintings are familiar and would have been copied and altered for book illustrations, and even theatre costumes in Charles’ case.  This is a wonderful collection which completely encapsulates not just the work of the Cattermoles, but also gives an insight into the Victorian art-collectors sentimentalised notion of the rich pageant of history.

The full collection can be viewed here