A Fascinating WWII Collection with a film-worthy story behind it.

One of the most interesting lots in our 15th June Medals & Militaria Auction is a George VI Military Cross medal group awarded to Captain Kenneth Hewison-Smith 220277. To include; Military Cross dated 1944 and in original Royal Mint case of issue, 1939-45 Star, Africa Star, Italy Star, War, Territorial Efficient Service, and E.R. II. Civil Defence Long Service Medal in case of issue; together with miniature MC, 1939-45, Africa, Italy, France & Germany Stars, Defence, War and Territorial Efficient Service. Also included in this lot is a quantity of personal and official letters (many relating to Hewison-Smith's time travelling through Italy after escaping from transportation between POW camps), press cuttings, and a manuscript describing Hewison-Smith's Italian experiences.

There are scant details publicly available about Captain Kenneth Hewison-Smith, but what we do know from the contents of this lot would make an amazing film filled with heart-rending details, close encounters with danger, comedic moments, historical scope, and plenty of derring-do and stiff upper lips.

Kenneth Hewison-Smith was born on 2nd June 1914, just a few weeks before the Assassination of Archduke Franz Ferdinand of Austria would trigger what would become known as the 'War to end all Wars'. Kenneth's father, Herbert George Smith, was one of the many millions enlisted in that global war and is recorded as being a Gunner for the Honourable Artillery Company (TE) 2.A. The earliest record amongst this lot is a letter to Mrs Smith from the Chaplain Corps informing her of her husband's death at Valenciennes from influenza. The First World War ended on 11th November 1918, and this letter is dated 22nd November; thereby dashing any hopes which Mrs Smith may have had that her 31 year old husband would return from the front. We do not know what kind of support Mrs Smith received raising her son alone, she was certainly not the only woman in that situation at the time, but by 1928 Kenneth was a pupil at Clifton College in Bristol. This lot includes letters from the school, academic certificates and press cuttings where Hewison-Smith is applauded for his prowess at rugby. He is described in one school-masters' letter as "a boy of exceptional ability, as is shown by the fact that, though primarily a mathematician, he was able to get a credit in the School Certificate in Greek, within a year of beginning the language" - displaying language skills which would be very useful just a few years later. Kenneth left Clifton College in 1933 and appears to have taken up a position at Imperial Chemical Industries Ltd (ICI).

"There can be few disappointments more crushing than that of the prisoner who loses his hope of deliverance at the very hour that he sees the gate of the prison opening to him."

By 1939, the World was at war again. Lieutenant Kenneth Hewison-Smith was reported missing whilst in the Western Desert on 21st June 1942. The following month he was confirmed as a Prisoner of War at the notorious Chieti PG21 camp in the Abruzzo region of Central Italy, as recorded by the official letter within this lot. Chieti was overcrowded, with poor sanitation, little running water and great deprivation. Conditions were so bad at this particular camp that it was raised for debate in the House of Commons. Prisoners' hopes must have been lifted when Italy signed the Armistice in September 1943, unfortunately a fateful blunder by British military intelligence meant that the Nazis were able to seize approximately 50,000 Allied prisoners and transport them to camps in Germany and Poland. Through coded messages and radio reports British intelligence had instructed POWs in Italian camps to stay put until the Allies arrived. The Italian guards dutifully abandoned their posts as arranged, but the German Army wasted no time in taking over the camps - imagine their surprise at finding thousands of prisoners waiting patiently within the camp, under threat of Court Martial from their own superiors…

The prisoners were soon rounded up and transported to camps still within the Nazi held areas of the theatre of war. It was during one of these transports that Hewison-Smith decided to escape. His story and the subsequent year he spent trying to get to Allied lines through the Italian countryside is detailed in the manuscript included in this lot. From the intrepid escape through a hole in the roof of the moving train carriage (badly injuring his leg in the process), to the kindness of Italian peasant families only too willing to help an Allied soldier helping to liberate their country from the Fascists; Hewison-Smith's manuscript details everything from the dire camp conditions, his close encounters with German officers while travelling, the people who helped and their living conditions (he definitely did not develop a taste for Italian food...), and the other escapees he meets on his journey (British, Belgian, Indian, American, South African etc - in fact the Italian countryside appears to have been over-run with Allied POWs), right through to his eventual meeting with a French Moroccan battalion (the famous Goum) and safety within Allied held ground.

His story is funny, fascinating and devastating at points. Accompanying the manuscript, this lot includes the forged identity paper Smith mentions having made up with the name Morelli Ugo (whilst severely hungover), a telegram from his wife who was based at Bletchley begging him to 'RETURN QUICKLY - I LOVE YOU', and post-war letters from the Italian families who supported him describing their awful situation after the war and asking for support themselves. Smith clearly intended to publish; there is a letter with notes from an interested publisher, but it appears that the manuscript 'Capistrello' (named after the village where Hewison-Smith stayed the longest) never made it print.

Once back in Britain, Hewison-Smith (now promoted to Captain) appears on the list for employees at Bletchley Park in Block F; but we do not know in what capacity. He then appears to have returned to ICI and been based at their plant in Dumfries during the 1950s. Very little more is known about Kenneth Hewison-Smith and he appears to have lived a quiet later life - although I imagine that he welcomed this after his astounding wartime adventures. 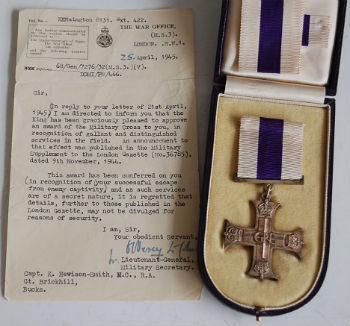