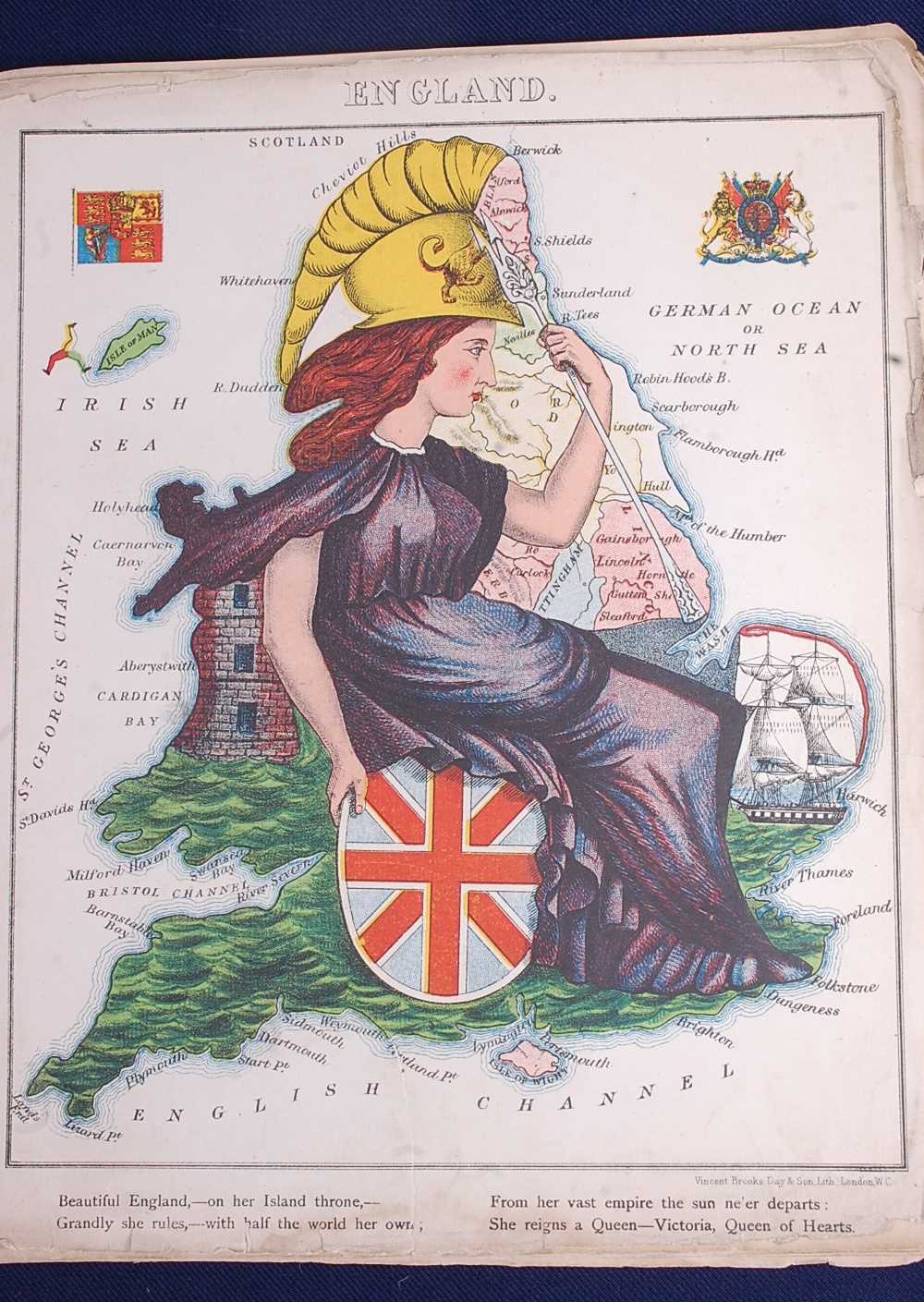 The witty and imaginative maps in this collection were drawn by Eliza Jane (Lilian) Lancaster (1852-1939) when she was just 15 years old and wanted to entertain (and educate) her bed-ridden brother. There is some mystery as to how the young artist teamed with up with the London journalist William Henry Harvey (1796-1873) under the pseudonym Aleph, who provided the descriptive quatrains for each map, but the ‘atlas’ was published in 1868.

According to Harvey’s introduction the intention of the maps was to:

'excite the mirth of children; the amusement of the moment may lead to the profitable curiosity of youthful students, and embue the mind with a healthful taste for an acquaintance with foreign lands. No history, no journal can be understood without a knowledge of maps, and good service is done when we make such information more easy and agreeable'.

Each map portrays their country as an anthropomorphic design depicting contemporary figures, historical elements and national symbols. Some of which may be considered ‘problematic’ today! While England’s Britannia is seated with a warship at her knee over East Anglia “Grandly she rules, - with half the world her own; / From her vast empire the sun n'er departs”, Ireland is described as a land of herrings and potatoes, and drawn as “A Peasant, happy in her baby’s smile”.

Italy is the striding red-shirted figure of patriot-revolutionary Guiseppe Garibaldi, who during his campaign to reunify Italy and overthrow the Papacy had been enthusiastically welcomed in England just a few years before the publication of these maps. The diminutive Pope Pius IX in Sardinia appears powerless in Garibaldi’s wake.

The perceived militarism of Prussia is evident in the prominent position of a large rifle, as is the close relationship between Kaiser Wilhelm I and his principal advisor Otto von Bismarck. Whereas Germany, comprising the smaller states of Saxony, Hanover and Bohemia etc, is portrayed as a studiously dancing woman presciently “on her visioned future proudly glancing”. The German Empire was unified, under Prussia’s dominance, just a couple of years later after the Franco-Prussian War in 1871.

The other maps comprise a gallant piper as Scotland, Owen Glandowr ruling over Wales, ‘fair’ France, Spain & Portugal joined in amity, Holland & Belgium embracing, an ice-skating Denmark, and the Tsar of Russia back-to-back with a bear.

Lilian Lancaster would go on to become a successful Victorian actress and comedienne whose act included sketching quick caricatures of audience members. She toured Europe and the US before her marriage to William Tennant in 1884. However, she returned to map drawing for children in later life by illustrating a book of Fairy Tales by Elizabeth Louisa Hoskyn entitled “Stories of Old” in 1912.

William Harvey published several other volumes, mainly pertaining to London and her people, including “The Old City, and Its Highways and Byways: Sketches of Curious Customs, Characters, Incidents, Scenes, and Events, Illustrative of London Life in Olden Times” and “London Scenes and London People”. Both published under the pseudonym Aleph and comprising extracts from his column in the City Press newspaper.

The Geographical Fun maps are now mostly found as individual prints, therefore we are delighted to be able to offer the full collection of twelve maps in their original book binding as one lot.