Lots 2001-2090 comprise the Damon Murrin Collection of medals, souvenirs and ephemera relating to Great Exhibitions, International Expositions and World Fairs from the 1801 French Napoleonic Exposition 'Progress of the Arts' onwards.  Here, Damon's widow Tatiana shares some of Damon's history and the development of his interest in collecting. 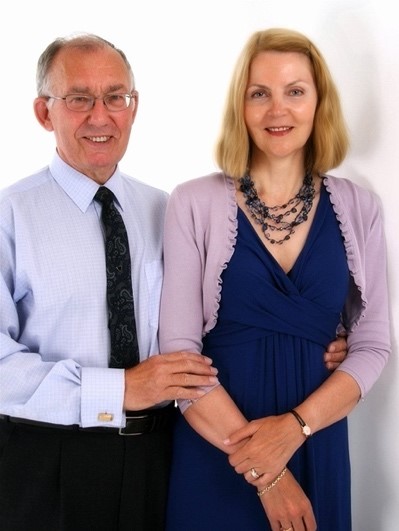 My husband’s other love

My late husband and I met in a very unconventional way. His broad interests, surrounding art and culture, enabled him to share common interests with me, a woman from Russia. Our first encounter was during an educational exchange for cultural immersion to East Anglia from St Petersburg, but I happened to be immersed deeper than could have expected.

There were three of us in the marriage: Damon, I and his collection, and I can understand why.  Once I started delving into the world of his collection, I realised it’s not just a possession, it’s a lifestyle.

Damon was born on the 21st of September 1943 in Loughborough, eldest of three sons in the family of Kenneth and Lilly Murrin.

Just a few months before Damon’s arrival into the world, the young family moved from London to escape the German Nazi bombing attacks in the capital, during the World War II.

The family moved a lot, due to the father’s frequent jobs changing. Being an architect, Kenneth used to work in various parts of the country. Damon and his brothers had an opportunity from an early age to watch the buildings being constructed and to appreciate how their father’s architectural ideas were being implemented into reality on the construction sites. One of the projects was on the interior of Holy Trinity Church in Worthing, Leicestershire.

Reflecting back on his childhood, Damon mentioned, that his introduction into the fascinating world of History and Art started from reading his father’s substantial collection of illustrated books on the historic buildings and cottages of the UK and the textbooks on civil engineering.

The frequent changes of the home addresses had made a profound impact on Damon’s character; one of his strongest childhood recollections was him struggling to make long term friends whilst at school, so, the books and his passion for reading, gradually were compensating the void. He became an avid reader and developed an interest for collecting books and ephemera.

Despite his enormous physical strength, Damon was not a keen athlete; he was bound to wear heavy-framed glasses since his teenage years. Therefore, rugby, football and swimming, the most popular sports amongst young boys of 1960s, were out of reach for Damon, but the books never failed him and remained his loyal lifetime friends.

After finishing school Damon studied at London Furniture College and received a qualification of a Cabinet Maker.

At the age of 21 he started working at the company ‘Trollope and Colls’, highly reputable builders, contractors, decorators and furnishing company. In consecutive years, his working biography was expanding from ‘Conran Furniture Factory’ in Thetford to PBS Plastic Building Suppliers in Norwich until he retired in 2007.

Damon loved Norfolk with its quaint seaside towns and villages and their rich cultural history, he also travelled a lot around the country, from the highlands of Scotland to the deserts of Syria. As soon as he arrived to the new place, he liked to browse places of interests and historical landmarks and never missed visiting the local antique shops, exhibitions and second-hand bookstores.

Damon was an indefatigable collector, always on the quest for material relating to the World Exhibition, 1951 Festival of Britain being one of his favourites.

Damon joined the British World Exhibitions Study Group in 1987, nine years later since it was formed by a small group of collectors of the Exhibition memorabilia. Andrew Brooks and Fred Fletcher, the joint authors of the book “British Exhibition and their postcards” one day met with Don Knight, an author of books on Exhibition at White City and Wembley. The three authors became the creators of an Exhibition Study Group in 1978. The small but keen group used to meet for the annual get-together weekends in various cities of the UK -” from Land’s End to John O’Groats”.

By joining the group, Damon found his like-minded companions and soon he was chosen to be the Membership Secretary and later became the treasurer of the group.

Being an active member meant that he accumulated vast knowledge about the subject, which is palpable throughout his personal collection of medals, postcards, books, leaflets, ephemera, and other memorabilia. All his treasures have been kept in immaculate order and sorted into individually labelled boxes all chronological order with the very first medal dedicated to 1801 French Napoleonic Exposition “Progress of the Arts” to the most recent one, relating to the 1992 Universal Exposition of Seville. Damon made his journey to Seville that year and he liked sharing his experience of visiting the port where Columbus started his voyage towards new discoveries.

I also remember when Damon just started to court me in 2000, our first conversation was about the Soviet Exhibition and achievements of the national economy of the USSR. He was doing his homework by reading about it in order to continue impressing me by his knowledge, and he succeeded! We married and moved to live under one roof: Damon, I and his collection. He was immensely happy to receive a gift from me as an addition to his treasures; a set of Russian-printed postcards depicting the main sight of VDNHk Moscow Exhibition, the stunning centrepiece - a fountain with gilded statues of women representing each of the 15 former Soviet Republics.

I should confess that seeing Damon’s magnificent World Exhibition collection for the first time, took my breath away!

My husband’s other collecting interests of books and postcards were: ‘Pottery and Ceramics’ and the ‘Christian missionaries in Africa and Asia’. He was also enthusiastically collecting books and memorabilia on the history and culture of  Soviet Russia. Damon was working tirelessly trying to master the Russian language by attending evening adult classes at the Education Centre in Norwich, where I was teaching. He managed to obtain an Entry Level Certificate at Russian Speaking, Reading, and Writing. This part of his biography deserves to be written in a separate chapter in his ‘Book of his Life’.

I am grateful to have had the collection in my life for two decades, it has been an emotional and educational journey providing me with knowledge and passion for the history and Art of the world of Exhibitions. As an educator I know the benefits of the sensory approach to learning. Being able to touch and feel the material, to appreciate the sophisticated beauty of medals and the social history behind every single postcard, enabled me to be more sensitive to these objects and their stories.

It is now the time to move on and give our collection to a new loving home.

We're sure that you'll agree this is a fascinating collection, which ranges around the world and through almost two centuries.  Items include commemorative and prize medals awarded to the most advanced scientific, technological and industrial innovations of the time, as well as leaflets, souvenirs & commemoratives, postcards, and even a hand-written diary detailing one Arthur Carter's tour from London to Chicago for the 1893 World's Fair along with accompanying timetables and maps etc! 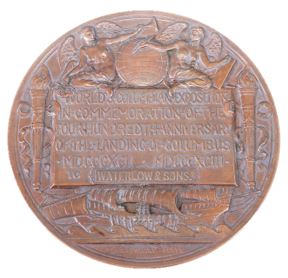 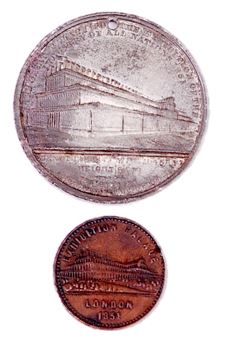