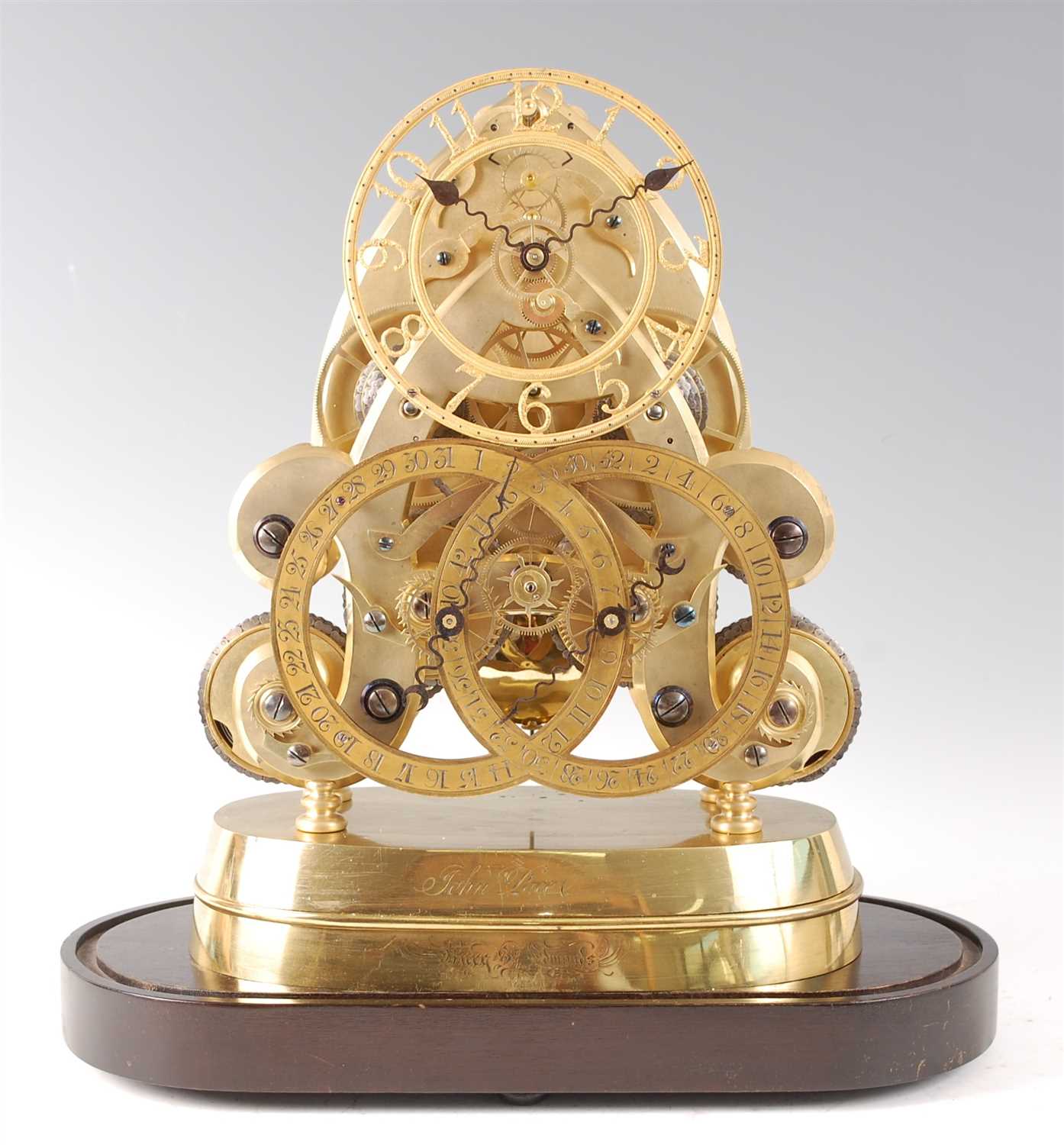 John Pace (1783-1867) was born in Whitechapel and hailed from an eminent Quaker family of clock and watchmakers who had been registered as working in the area from at least the 1630s. By 1804 he is recorded as working in Bury St Edmunds, and later more specifically in Abbeygate Street (No.19) from 1823 until 1855.

In a town bristling with renowned clockmakers, Pace managed to rapidly gain a good reputation for his inventiveness as well as for the quality of his work. His ingenious nature led to him patenting an illuminated ‘night timepiece’ (No.6506) in 1833, and creating elaborate skeleton clocks such as this example. However, Pace was clearly happy to work on all manner of clocks, watches and barometers, and formed a strong working relationship with Bury St Edmunds gunsmith and clockmaker Benjamin Parker – sharing design and precision work between them to produce excellent pieces.

During this time he married Frances Rebecca Hancock of Mitcham with whom he had four children. Pace was also a leading figure in the Bury St Edmunds Society of Friends and was secretary of the local Quaker meetings between 1827-1832. He is also recorded as being Alderman for the North Ward in 1843 and secretary of the Mechanics Institution which was based in Crown Street from 1824.

By the 1850s Pace was at the peak of his powers, and as such exhibited three examples of his work at the Great Exhibition of the Works of Industry of All Nations held at the Crystal Palace in 1851. This comprised of two clocks and a barometer; one of these being a skeleton clock which ran for three years on just one winding. He is referred to in the Exhibition catalogue as “Pace, J. Bury St Edmunds, - Inventor, Designer & Manufacturer”.

Such was his reputation, that even by the end of the 19th century his clocks were still considered highly desirable. The auction at Hengrave Hall in 1897 included “A fine old early English striking clock… made by John Pace, Bury”. Two silver watches by Pace are also included in the world-famous Gershom Parkington timepiece collection on display at Moyse’s Hall Museum in Bury St Edmunds.

This particular clock found its way into the collection of Joseph Maumus Meraux (1922-1992), a major landowner in Louisiana, whose collection of ‘Rare and Unusual’ clocks were sold at Sotheby’s on 28th June 1993; this lot being No.396.

The steel hands all appear original, no breaks, some minor pitting to metal only.

All three dials good, with some minor surface scuffing only.

Some tarnishing to edges of both date and week dials.

Backplate with several small dents to outside edge on one edge (see extra image).

Two unexplained holes to either side of base of pendulum (possibly to secure pendulum), and a single hole near foot (see extra images).

Base with several small areas of surface wear and very fine surface scratches where it has been over-polished.

Blue steel screws all good, but most with some minor areas of wear.

Ebonised plinth possibly associated, as shape is elongated compared to base of clock.

In summary, appears in good and generally original condition with some modest age wear.