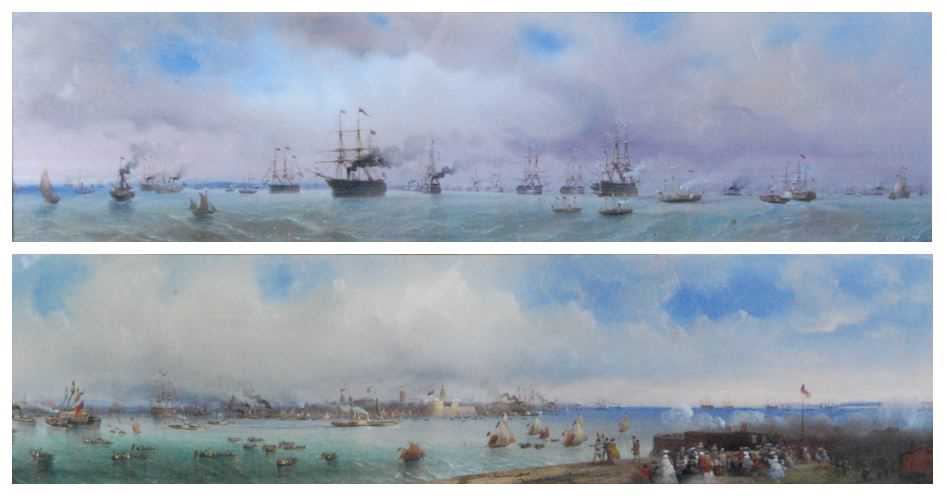 Probably depictions of the Naval Review held on 23rd April 1856 on the return of the fleet from the Crimea along the south coast from Portsmouth, at which the Royal Family attended aboard the Royal yacht 'Victoria & Albert' to see a grand flotilla of ships of the admiralty including warships, paddle-steamers, pivot ships and smaller vessels, all bedecked with flags and streamers, thousands of people attended including international visitors and nobility,

Provenance: Consigned from a local deceased estate, being descendants of Robert Heath (of Robert Heath & Sons, founders of the Biddulph Valley Colliery and Iron Works) who resided at Biddulph Grange between 1871-1922 (however it is not known whether these paintings were originally hung at the Grange), and direct descendants of the Earls of Denbigh of Newnham Paddox.

Carlo Bossoli, who spent much of his childhood in Odessa, first came to prominence thanks to his sweeping vistas and historical sketches of the Crimea, which gained him the patronage of Prince Michael Vorontsov, Viceroy of the Caucasus. Vorontsov's subsequent commissions enabled the artist to travel throughout Europe, where he gained further acclaim and Royal patronage including that of Queen Victoria, Prince Eugene of Savoy, and Empress Eugenie, wife of Napoleon III. Bossoli lived and worked in Italy for several years, and his scenes depicting the Risorgimento became some of his best known works.

Towards the conclusion of the Crimean War (1853-56), when this pair were undertaken, he travelled to London where his Crimean Exhibition on Pall Mall and the publication by Day and Son of his Scenery of the Crimea garnered great acclaim.

Bossoli was buried in his birth town, Lugano, and a street in Turin, where he settled in later life, is named after him. Works by Bossoli are held in museum and gallery collections worldwide, including a large selection at the Milan Museo del Risorgimento and the Turin National Museum .


Colours good and vibrant throughout both works.

Further images are available on request.